Enjoy the outdoors with these lawn games available at the Atwater and Smith Libraries!

Games check out on your library card for one week and must be picked up and returned at their respective locations.

Tumbling Timbers (Smith/Atwater) is perfect for indoor or outdoor events such as BBQ’s, tailgating, camping and much more. The game includes fifty-six – 1.5 in. x 2.5 in. x 7.5 in. pieces and 19 rows of tumbling timbers. Players take turns removing a block (using only 1 hand) and placing it on the top. The object is to be the last player to successfully stack a wooden block without knocking down the tower. This timber game stands 2.5 ft. tall to start and depending on your level of experience can reach a height of 5 ft. 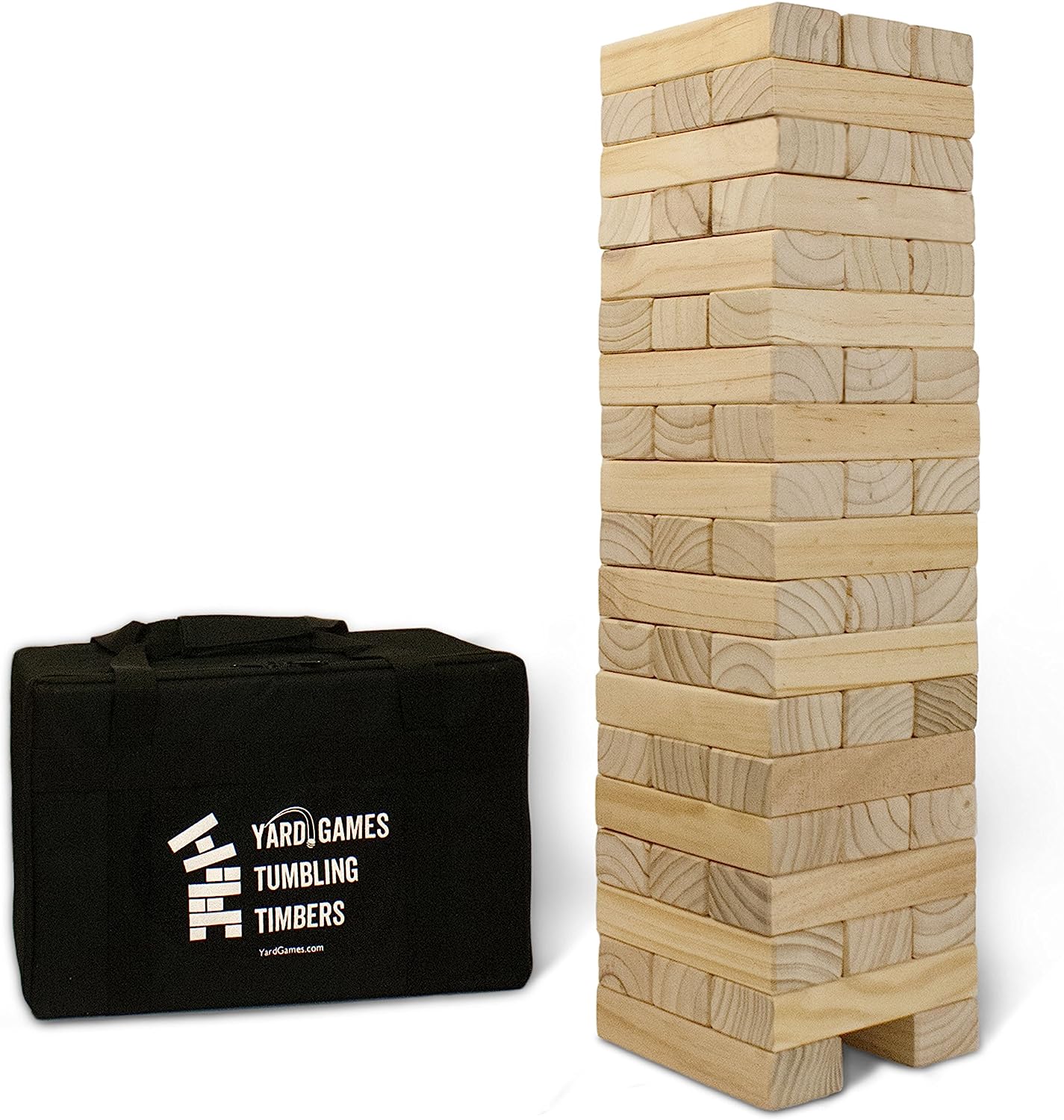 Ladder Toss (Smith) is an outdoor game played between two teams who take turns attempting to throw a bolo made of two golf balls connected by a rope at a ladder. Each ladder rung is worth varying point values of 1, 2 or 3 points. In order to win the game, a team must score exactly 21 points. 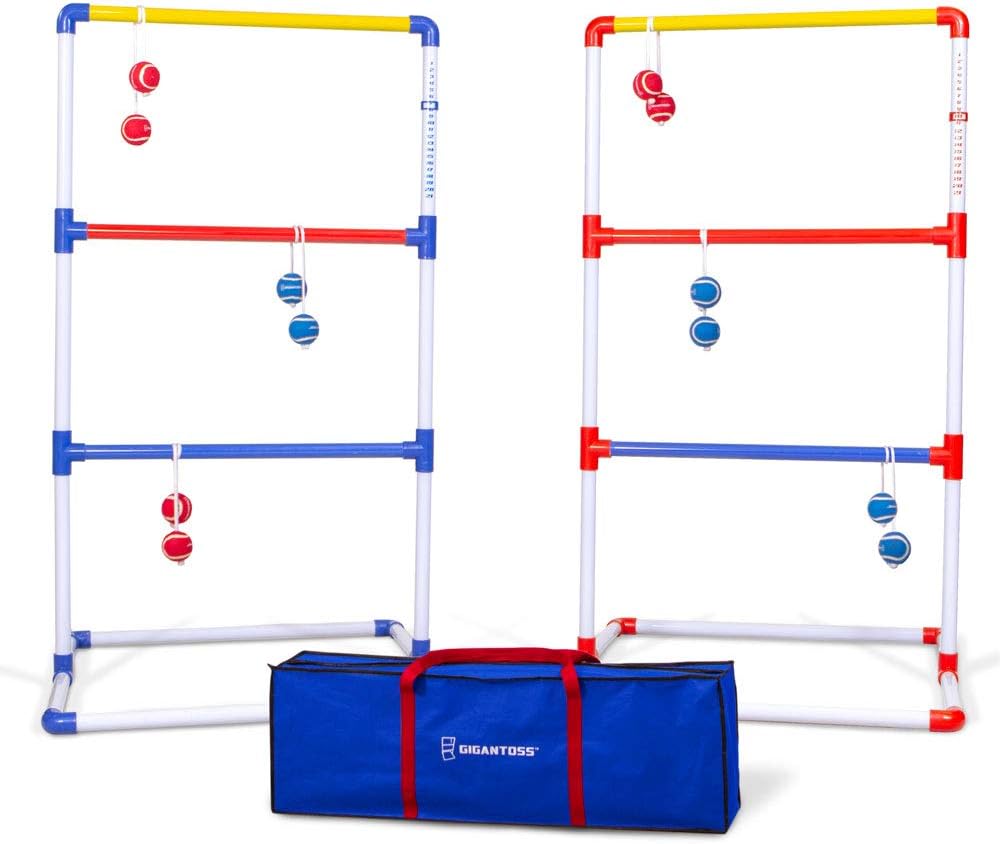 Croquet (Smith) is a classic lawn game ideal for barbeques, picnics and more as it’s easy to understand for players of almost any age. The object of the game is to use a mallet to hit your ball(s) through the course of hoops (wickets) in the right sequence and finish by hitting them against the center stake. The first player to successfully navigate through the course wins. 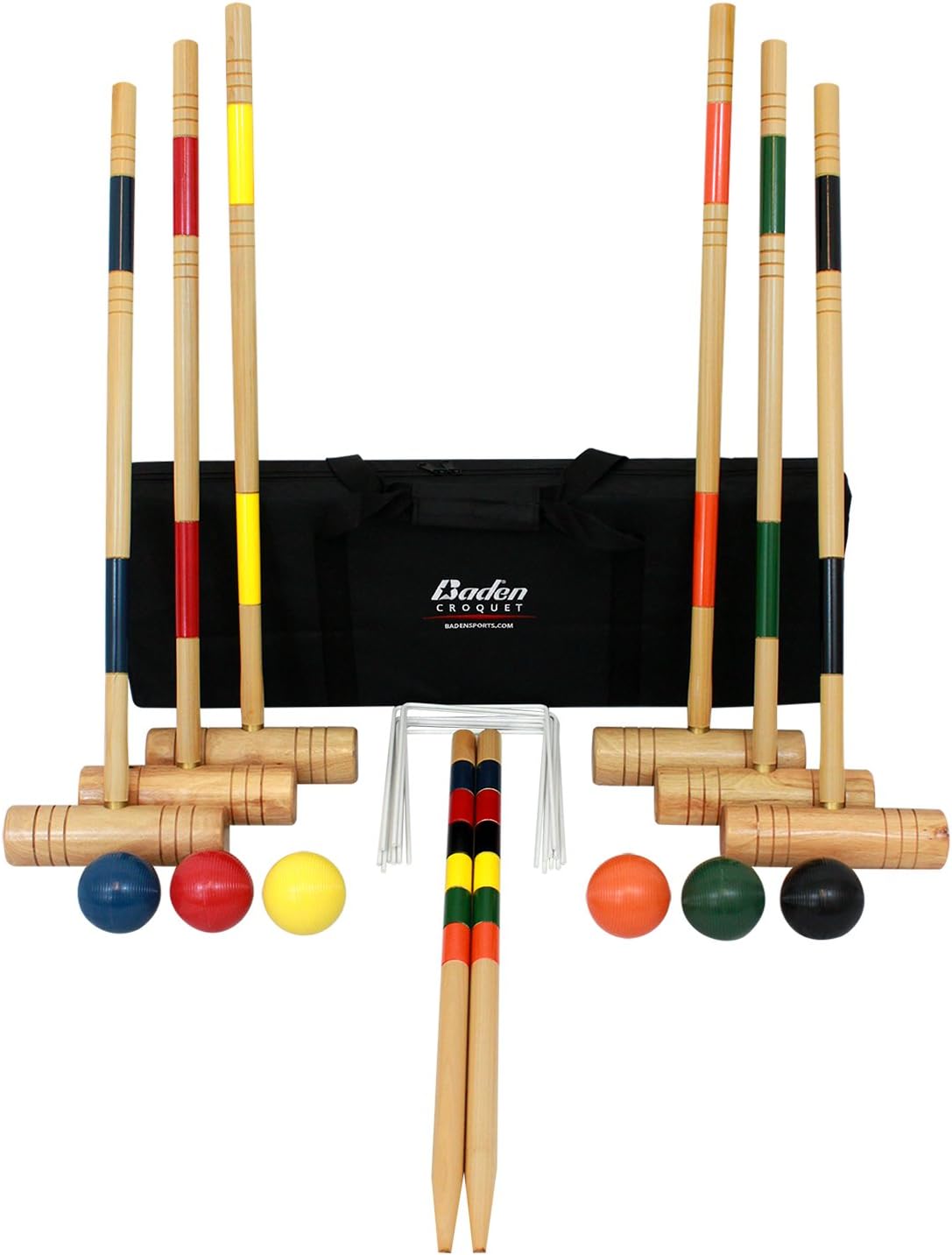 Cornhole (Atwater/Smith) is a classic bag tossing game that is fun for all ages. Players take turns throwing their bags at a raised platform (board) with a hole in the far end. A bag tossed in the hole scores 3 points, while one on the board scores 1 point. The game can be played with 2 or 4 players. 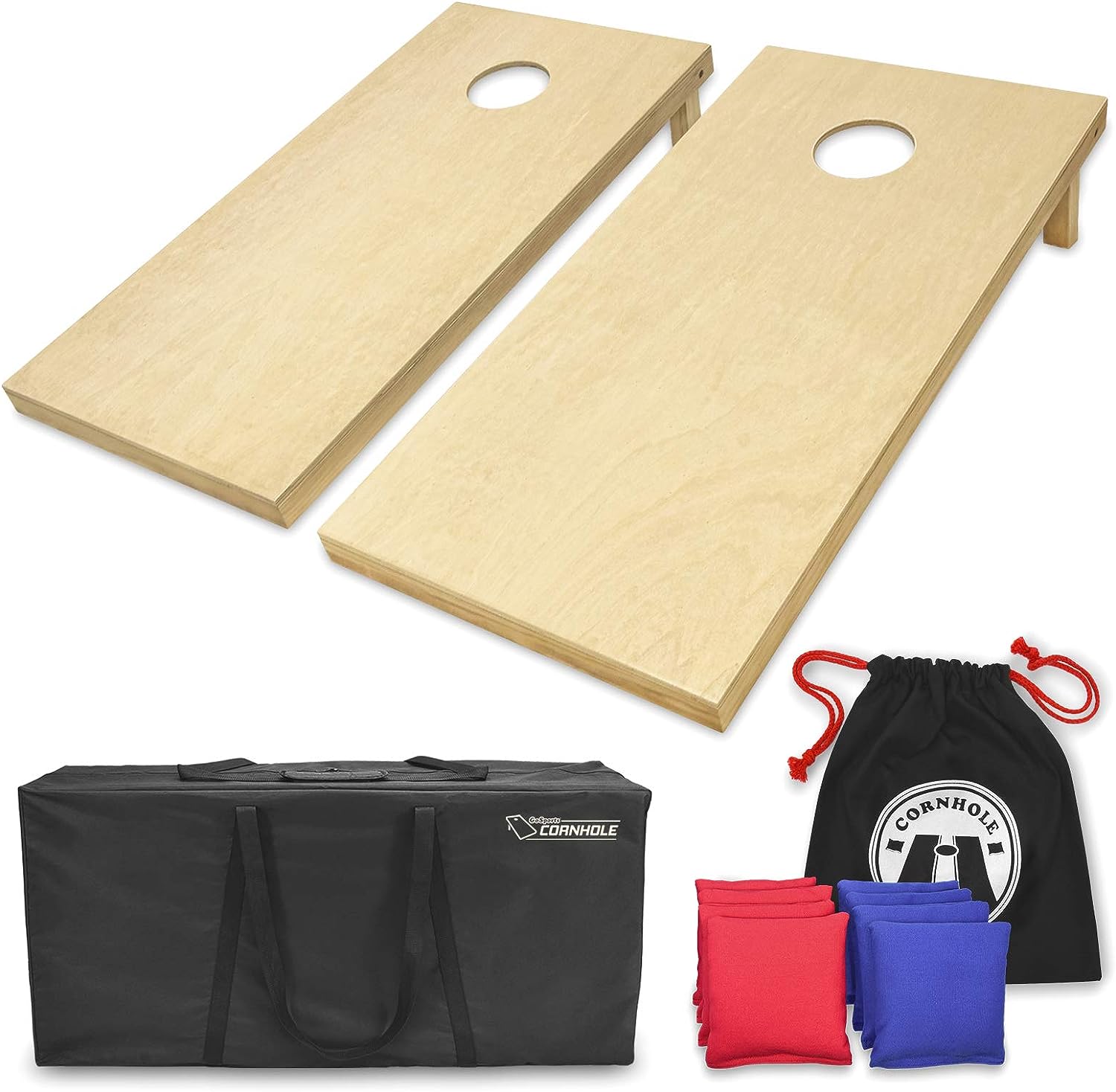 Kan Jam (Smith) is a 4-player disc game, similar to bean bag toss, played with a flying disc that uses teamwork to score. The object of the game is to score points as a team by throwing the disc in the goal (“kan”). You and a partner work together to get the disc to do one of three things: hit the kan, go inside the kan through the top opening or, best of all, through the kan’s slot opening for an Instant Win. One player throws the disc toward the kan and the other can redirect it. 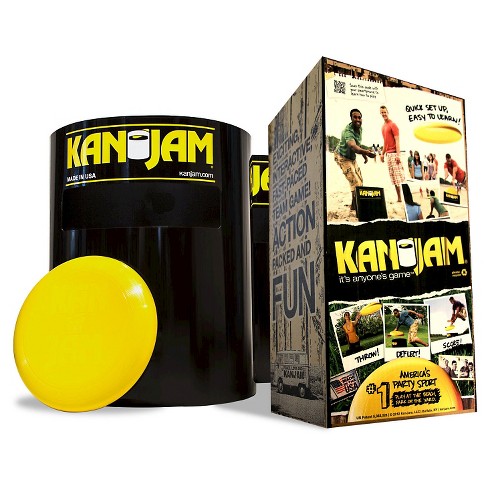 Potato Sacks, Egg and Spoon, 3 Legged Bands (Smith) Potato sacks: Each racer puts both legs into their sack and they race by hopping to a designated spot and races back.  Can also be done as a relay.  Egg and Spoon: Pick an area outside with a straight line between two landmarks.  Participants line up at the starting point, holding a spoon with an egg balanced on top.  Once everyone is ready, shout “on your marks, get set, GO!” and let the race commence.  Three legged Bands: Have each player stand next to his partner and put their arm around partner’s waist.  The partners’ inside legs (the right leg of the partner on the left and the left leg of the partner on the right) should be touching.  Tie the partners’ inside legs together so each pair of participants has three legs rather than four! 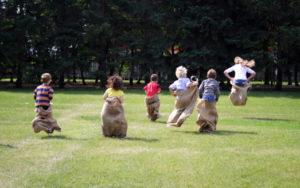 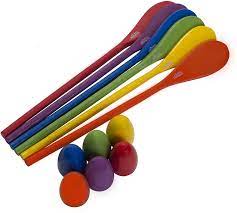 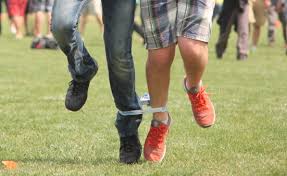 Yard Dice (Smith) are large hand sized dice meant for playing a wide variety of diced-based games in outdoor settings like a backyard get together, BBQ, birthday party, work party, picnic and much more.  These oversized dice typically come in sets of six, which allows you to play many different games. 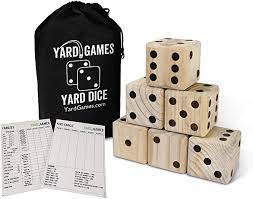 Spikeball (Smith) is a team sport played by two teams of two players.  The object of the game is to hit the ball into the net so that the opposing team cannot return it.  A team is allowed up to three touches to return the ball.  The rally continues until the ball is not returned properly. 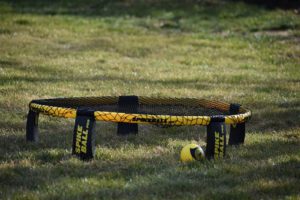 Spikeball Rookie (Atwater) is Larger equipment designed for kids and beginners. For 2-6 players    team sport played by two teams of two players.  The object of the game is to hit the ball into the net so that the opposing team cannot return it.  A team is allowed up to three touches to return the ball.  The rally continues until the ball is not returned properly. Pickleball(Smith)   Pickleball (Atwater) is a paddleball sport (similar to a racket sport) that combines elements of badminton, table tennis and tennis.  Two or four players use solid paddles made of wood or composite materials to hit a perforated polymer ball, much like a wiffle ball, with 26-40 round holes over a net. 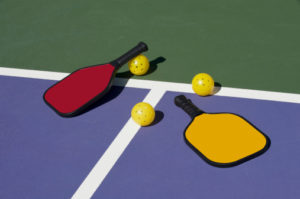 Capture the Flag (Smith) A game in which players on each of two teams seek to capture the other team’s flag and return it to their side without being captured and imprisoned.

Lawn Darts (Smith) (also known as javelin darts, jarts, lawn jarts or yard darts) is a lawn game for two players or teams.   The darts are intended to be tossed underhand toward a horizontal ground target, where the weighted end hits first and sticks into the ground. 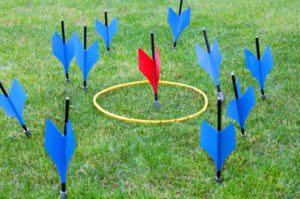 Disc Golf (Smith) is a variant of ball golf, but with special frisbees or flying discs.  However, instead of hitting a ball off a tee and aiming at getting it down a hole in as few strokes as possible, disc golf involves throwing a disc from the tee and hitting an above-ground target in as few throws as possible. 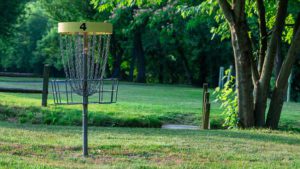 Bocce (Smith)  Each player or team in turn rolls or tosses four wooden, metal or composite balls called bocce, each 4-5 inches in diameter; toward a smaller ball, called the boccino or pallino.   At the end of a round, a side received a point for every ball nearest to the pallino than the nearest opposing ball. 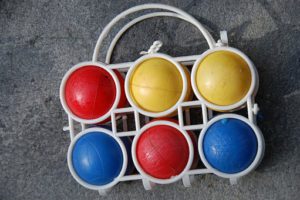 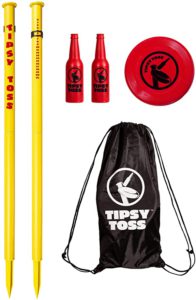 4 In a Row (Atwater) This giant version of a classic measures 3 and half feet tall, and four feet wide. Kids and adults will love it! Make any event a blast with a game that no one can resist getting in on the action. It is perfect for birthdays, beach days, sleepovers, backyard BBQs, and more. Let the games begin! The aim of this classic game is to be the first to connect 4 pieces in a row in any direction. The colorful oversized pieces really bring the game to life! It is simple to assemble this floor toy in just a minute with the included instructions. A lever empties all the game pieces to restart, and disassembly and storing is easy too! Have a blast while you test your brain skills, hand eye coordination and improve your critical thinking. Great as a two-player game or with teams